The Beginning
Fire protection in San Bernardino actually had its origin June 22, 1865, from a meeting held in the Pines Hotel. Four days later the first fire company was organized with the appointment of William McDonald, foreman; Nathan Kinman, first assistant; Aubrey Wolf, second assistant; and I. H. Levy, secret planing-treasurer.

A concert was held to raise funds to purchase needed fire-fighting equipment. The equipment was purchased with $103 collected from the concert and consisted of four ladders, four axes, four hooks, twenty-four buckets, a fire bell and a speaking trumpet. 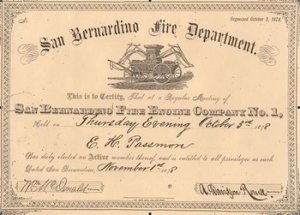 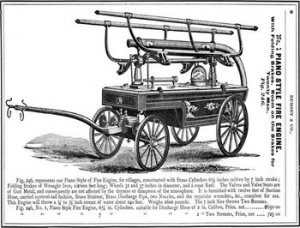 Third Street, at the foot of “C” Street (now known as Arrowhead) was the site selected on which to erect San Bernardino’s first fire station. The “fire laddies” took an active part in the social life of the community, as they did in all small communities at that time. No celebration was considered complete without an exhibition by the “fire boys”, and the annual ball for their benefit was one of the social events of the year. The company was in existence until 1871 when the property was sold. The money from the sale of the property was placed in the trust of M. H. Suverkrup, to be invested for the benefit of the company.

The present fire department was founded when on October 3, 1878 when members of the old company formed a volunteer company. The funds from the sale of property and equipment in 1871 was used in the formation of the new company. The following men were the officers of the newly founded company: William McDonald, foreman; Raymond Woodword, first assistant; J. W. Morgan, second assistant; A. D. Rowell, secretary; C. F. Roe, financial secretary.

With the help of the town trustees and citizens, the first Engine and Hose Companies were formed. Two pieces of apparatus were purchased from “Rumsey & Company” in Seneca Falls, New York. Pioneer Engine Company #1 consisted of a “Rumsey” #246 piano engine (a hand pumper) capable of supplying two hose streams. An elaborate “Rumsey” Hose Cart was also purchased. The Pioneer Hose Company formed with M. Hayden as the Foreman. Uniforms were adopted for the first time for the San Bernardino Fire Department personnel. 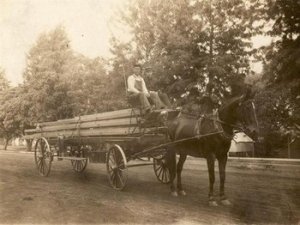 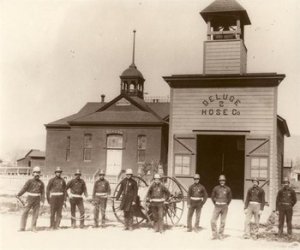 Prior to 1890, the city was supplied by a water system for fire fighting purposes that depended mainly upon cisterns and an open flow of water. Pressure was obtained by the use of a hand-drawn steamer to pump water. In 1890, a closed water system with high gravity pressure was installed and a horse-drawn hose wagon replaced the steamer. Over twenty miles of pipe were laid right in the city and the water piped from a large reservoir, situated four miles northwest of the city, the water being furnished by several large artesian wells. This gives a sufficient pressure to throw the water over 100 feet into the air in the center of the city.

Today’s system actually is three separate, interconnected systems: a lower, an intermediate, and an upper system. These are a combination of gravity and booster pump systems. Water is obtained from 55 wells using 55 turbine pumps and released into the system using 44 booster pumps and 550 miles of water mains. Thirty strategically placed reservoirs, having total water storage of about 95 million gallons, are in use and there is a total production capability of about 81 million gallons per day. As of this date, we presently have an excess of 4,000 fire hydrants in the city.

End of the Volunteer Fire Department

The volunteer department was in operation until December 3, 1889. At this time, the department was reorganized under Chief D. H. Wixom and became a partly paid department.

In February of 1889, the trustees of the city bought a span of horses. “Frank & Sam” worked in the streets by day and were harnessed at night to pull the steamer formerly pulled by hand.

The city trustees purchased a swinging harness in July of 1889, and the horses were used exclusively for fire department work. Alan Glatz was the driver.

The “Alert Hook and Ladder Company” was added to the department in September 1889 with a horse-drawn ladder truck. An electric alarm system with six alarm boxes, tower bell and hose gong was installed in April of 1891.

Also in 1890, a third hose company was established. “Niagara Hose Company #3” was stationed on 3rd Street between “G” and “H” Streets. It is believed that they utilized the hand-drawn hose cart that was formerly “Pioneer Hose Company #2”. It is unknown how long this company was in existence.

In April 1891, the first electric alarm system was installed. It consisted of a tower bell, house gong, indicator, and six street boxes. This system grew slowly but steadily into the 1970’s, when there were over 225 boxes and a modern alarm dispatch office, which was located in the basement of city hall with permanently assigned, alarm operators. With the proliferation of the telephone, the boxes were removed as most of the alarms were false. Fire dispatch is now located in the police station at 7th and “D” Street.

On November 5, 1892, the Stewart Hotel, a four-story structure located on the corner of Third and “E” Streets was entirely consumed by fire. Many firemen were injured fighting this blaze, which was considered at the time to be the most serious and disastrous conflagration since the reorganization of the fire department. 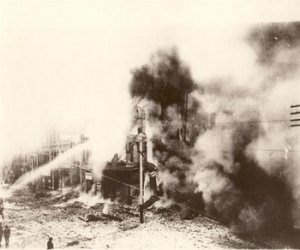 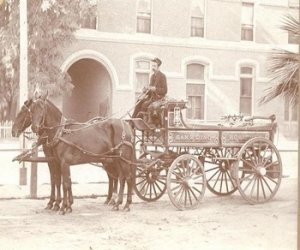 In August of 1894, Chief Wixom resigned and his assistant, J. H. Tittle, was appointed Chief. During the administration of Tittle, the hose wagon was made stronger and became the first ball bearing fire apparatus on the West Coast.

In 1896, the San Bernardino Fire Department won its first trophy on Mayday; a silver cup for the best-decorated team. One of the original horses died in that same month and the city purchased a pair of thoroughbred roadsters, “Dick & Prince”. The death of “sam”, the horse, grieved the entire community. The city held a funeral for him, as he was a pioneer of the fire department. 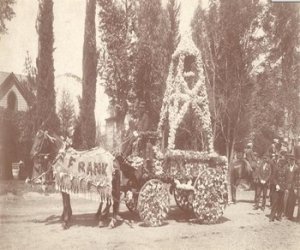 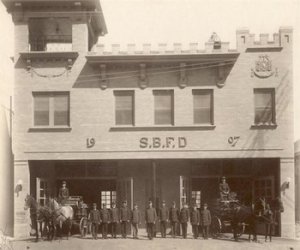 Chief Tittle resigned in August of 1897, and 0. M. Stevenson was appointed Chief.

Another destructive fire took place December 29th, 1897. The planting mill and a number of cottages on Fourth Street were totally destroyed. The fire broke out during a fierce north gale (Santa Ana’s) and gained such tremendous headway, in such a short period of time that it was simply impossible for the fire department to control the fire before great damage was done.

In 1910, the first piece of motorized fire equipment was added to the department. This was a Pope-Hartford hose wagon. Later, the hook and ladder was modernized by the addition of a 1912 Pope-Hartford tractor. 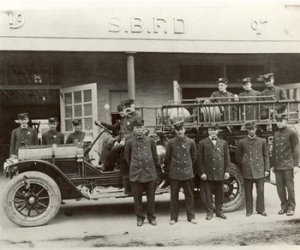 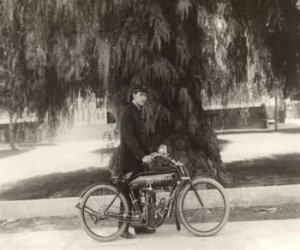 The first full-paid Chief on the department was F. G. Starke, who was appointed in 1911 by Mayor Wixom. Shortly after finishing his last term, Chief Starke died. At this time, the San Bernardino Fire Department had three paid firemen and fifteen volunteers.

Succeeding Starke was L. M. Field, who was appointed in June 1917, by Mayor Catick. In June of 1919, Al Glatz was appointed by Mayor Henderson. Al Glatz had been on the fire department for many years, and died shortly after his term. In 1921, Chief 0. W. Newcombe was appointed by Mayor McNabb and had two fire stations. The stations were located at Fourth and “D” Streets and at the West End of San Bernardino at 7th and “L” Streets. 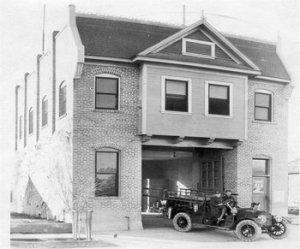 At this time, the San Bernardino Fire Department employed ten full-paid firemen and had no more volunteers.

The fire prevention bureau was implemented about 1929 with the appointment of a full-time inspector. The bureau has had different levels of staffing throughout the years and during the 1970’s employed approximately twelve persons, which was probably the most ever assigned to the bureau.

In 1962, after another bond issue, three Seagrave pumpers and one 100-foot ladder truck were purchased. In 1970, the department purchased its first American La France.

During the appointment of Raymond W. Shaw as Chief in 1971 to 1980, a station relocation program was completed in 1975, with stations 3, 5, and 6 in new quarters, and station 8 relocated in the existing station adjacent to Patton hospital. Also, a 1,000 gpm American La France was purchased in 1975 along with two light helicopters, which were placed in service and housed at station 10, located at Mill and Arrowhead. A paramedic service was established in 1976, which consisted of three units and 23 certified paramedics. The department also had all personnel trained as emergency medical technicians.

Suppression and shop personnel combined efforts to design and construct various pieces of equipment. These included 9 brush tankers, 2 paramedic trucks, a heavy rescue and an attack unit. All suppression equipment at that time (engines and trucks) were repowered with diesel engines.

From 1980 to 1988, Gerald Newcombe was Fire Chief. During this time, the Central Fire Station was relocated from 456 Mt. View to 200 East Third Street and Station 11 was erected at 450 Vanderbilt Way. The crew assigned to Station 11 took over hazardous materials response within the city. The first female firefighter was hired by the fire department.

In November of 1980, the Panorama Fire swept down upon the city destroying 286 homes and taking 4 lives. This was the most devastating fire to strike the city of San Bernardino and went on for over 3 days. At the same time, the Sycamore Fire was burning at the north/east end of the city. 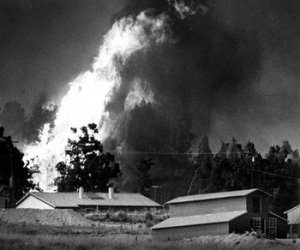 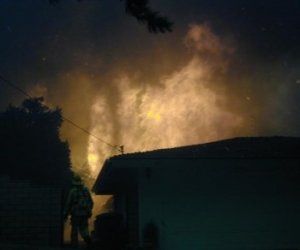 On May 12, 1989, a runaway Southern Pacific freight train with 69 hopper cars carrying a product called “Trona” derailed in the Muscoy area. Seven homes were destroyed and 4 others extensively damaged. Of the 5 crewmembers aboard the train, 2 were killed and the other 3 injured. Two residents were killed and 1 seriously injured.

On May 25, 1989, a Cal/Nev gasoline pipeline, located directly beneath the point of impact of the previously derailed train, exploded with a fire column spurting over 1,000 feet in the air. Subsequently, 2 residents were killed, 3 received serious injuries and 16 received minor injuries. Eleven homes were destroyed and 6 received moderate fire and smoke damage.

From 1990 to 1997, William Wright served as Fire Chief. Chief Wright was the first Fire Chief enlisted from outside the community, coming from Orange County Fire Authority where he served as the Fire Marshal. During his tenure as Fire Chief, the positions of Battalion Chief Aide and Truck Tiller Engineer were eliminated.

Chief Wright changed the configuration of paramedic response from a squad concept to that of ALS engines, with 5 engine companies strategically located throughout the city with 2 paramedics on each of the 5 engines.

In 1997, Larry Pitzer became Fire Chief. Also enlisted from outside the department, Chief Pitzer was previously the Operations Chief for the Salem, Oregon fire department.

Chief Pitzer initiated an agreement with the San Manuel Indian Tribe, whereas the department will provide fire and EMS response to the tribal lands in exchange for the tribe’s purchase of 3 new Pierce engines and a hazardous materials truck. In addition, American Medical Response and the department enter into a joint EMS venture. The department and AMR will cooperate in the handling of all EMS calls, and each engine within the city now has 1 paramedic assigned.

In 1998, the department entered into a contract with San Bernardino County that assigns all fire and EMS response within the 11 county islands to the city.

On Sunday, October 25, 2003, a vegetation fire was reported in the area of Old Waterman Canyon Road, north of the City. The Old Fire, as it called, began to rapidly spread since it was being fanned by north winds gusting to 30 mph, 90-degree temperatures and 6 per cent humidity. The fire burned approximately 91,000 acres of wildland and in the City of San Bernardino itself, 330 homes were destroyed and property damage was over 126 million dollars 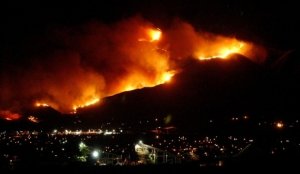 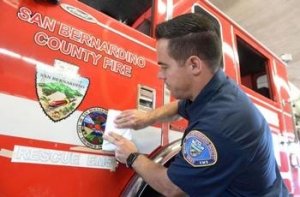