Local 935 Pipes & Drums is comprised of members of the Local who donate their time to participate in memorial services and displays. Our group participates annually at the CPF Fallen Firefighter Memorial in Sacramento.

The Tradition
The tradition in the United States of playing bagpipes at fire department funerals goes back over 150 years. When the Irish and Scottish immigrated to this country, they brought many of their traditions with them.  One of these was the Great Highland bagpipe, which was often played at funerals. It wasn’t until a massive Irish immigration to the east coast of the United States that the tradition of the bagpipes really took hold in the fire department.  The only jobs the Irish immigrants could get were the ones no one else wanted, jobs that were dirty, dangerous, or both. It was not uncommon to have several firefighters killed at a working fire.  The Irish firefighters funerals were typical of all Irish funerals – the pipes were played.  It was somehow okay for a hardened firefighter to cry at the sound of bagpipes when his dignity would not let him weep for a fallen comrade. It wasn’t too long before families and friends of non-Irish firefighters began asking for the bagpipes to be played for fallen heroes.  The bagpipes add a special air and dignity to this solemn occasion. Bagpipe bands were soon established to play for events and funerals.  Many bands wear traditional Scottish dress while others wear the simpler Irish uniform.  All members wear the kilt and tunic, whether it is a Scottish clan tartan or Irish single color kilt. Today, the tradition is universal and not just for the Irish or Scottish. The bagpipes have become a distinguishing feature of a fallen hero’s funeral. 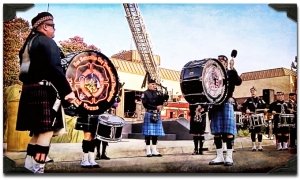