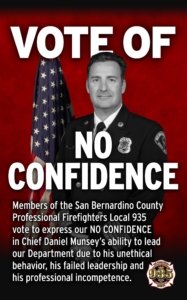 WHEREAS Daniel Munsey was hired as the San Bernardino County Fire Chief in November of 2019; and

WHEREAS one of his first actions as Fire Chief was to write 6-month, one-year and five-year management plans attacking the Leadership and Members of Local 935; and

WHEREAS, in January of 2020, Chief Munsey illegally attempted to break the County’s MOU with Local 935 by unilaterally eliminating the ops/leadership team; and

WHEREAS, after the start of the Pandemic in March 2020, he failed to prepare the Department for the health and safety impacts of COVID 19 – including a lack of PPE’s and other preventative equipment that put County Firefighters and the residents of San Bernardino County at much higher risk of infection; and

WHEREAS, in June of 2020, he demonstrated racial insensitivity and extremely poor judgement by participating in an inappropriate group social media post during the George Floyd protests in which Munsey asked where the looting was occurring so he could get a free television; and
WHEREAS, Chief Munsey compromised the integrity of his office in June of 2020 by damaging a county vehicle and failing to properly document the incident – a violation that would have resulted in severe disciplinary action for any 935 Member; and

WHEREAS, he abandoned his responsibilities to the people of San Bernardino as Fire Chief in July 2020 by leaving to take a fire team assignment in Los Angeles in the midst of the Pandemic and the FP-5 vote; and

WHEREAS, in October of 2020, he compromised the safety of San Bernardino County residents by utilizing a convict fire crew comprised of criminals in place of professional Firefighters. His actions undermined the public credibility of the Department and its employees; and

WHEREAS, in November of 2020, he commissioned a test for the position of Division Chief without informing qualified members of Local 935; and

WHEREAS, he failed to properly staff County ambulance and fire suppression services. By forcing employees to repeatedly work multiple days beyond their regularly scheduled hours, Munsey created serious physical and emotional problems for both employees and their families.
WHEREAS, he failed to take action to ensure that a Fire Captain suffering from lung cancer would have been able to maintain his medical benefits;
WHEREAS, he failed to work with the members of the Apparatus Committee, causing them all to resign and leaving County Firefighters at a much greater risk of operating unsafe equipment; and
WHEREAS, Chief Munsey has totally failed to support or provide funding to improve the deplorable conditions in many of our older County Fire Stations, creating serious health and safety conditions for County Fire Personnel;

THEREFOR BE IT RESOLVED that the Members of the San Bernardino County Professional Firefighters Local 935 vote to express our NO CONFIDENCE in Chief Daniel Munsey’s ability to lead our Department due to his unethical behavior, his failed leadership and his professional incompetence; and

IAFF Local 935, is a labor organization that represents the men and women of the San Bernardino County , Big Bear City , Big Bear Lake, Colton, Loma Linda , and Montclair Fire Departments. Its members are dedicated to the protection and safety of the Communities they serve. The firefighters of Local 935 are committed to the well being  of the public through our humanitarian efforts, donations, and events.

Wednesday morning at 2:43 San Bernardino County Fire crews were dispatched to a reported commercial structure fire in the 9000 block of Newport Ave, Fontana. Multiple 911 callers stated an apartment on fire.

Firefighters arrived to find heavy fire and smoke showing from two units on the second floor of the multi-unit apartment complex. Due to the size of the fire and apartment units adjacent, a second alarm was quickly struck. Arriving crews attacked the fire, working to keep the fire from spreading to the ten additional units. Firefighters initiated an offensive attack, working both inside the second floor apartments and on the roof to suppress the fire. Crews also completed searches of the apartments and evacuations of adjacent units to ensure all residents were outside. The fire was brought under control within thirty minutes of arrival. Firefighters were successful in keeping the fire to only two units of the twelve unit apartment complex.

Once the fire was knocked down, firefighters shifted their focus on salvage and overhaul operations. Edison was requested due to the fire impacting the main breaker / meter area for the twelve unit building. Due to the extensive damage to the utility connection, the entire building was disconnected from the power grid until repairs could be made.

Approximately 40 residents were displaced due to fire, smoke, water or electrical disruption. San Bernardino County Fire I’m cooperation with California Fire Foundation supplied Supplying Aid to Victims of Emergency or (SAVE) cards to those who were greatly impacted by the fire. These cards will assist those impacted with items they need to jumpstart their recovery from the fire. Red Cross was also requested to assist to aid victims with temporary housing.

Bless all the fire fighters

Baldy Mesa Elementary, you were awesome! Thank you so much for having us at your Hometown Heroes Assembly. Your cards are the best we've seen by far! 🚒 🏫 💪 ... See MoreSee Less

God bless all the Firefighters and keep them safe.

Thank you for your service

Thanks for your service,

ME4 arrived on-scene to find heavy smoke showing from two units of a multi-unit commercial occupancy. Due to the size of the occupancy & heavy smoke, a second alarm was quickly struck. Crews initiated a transitional fire attack, working to suppress the fire and kept it from spreading to additional units. When additional firefighters arrived, crews transitioned inside for interior operations finding heavy smoke conditions inside.

The building, a metal “butler” style building made it challenging for crews to vertically ventilate the structure. Vertical ventilation is used to increase visibility, limit lateral spread & increases survivability inside the structure. Crews completed searches of the units to ensure no victims were inside at the time of the fire. All searches came up negative. Firefighters were successful in saving four units of the commercial strip.

The fire was ultimately knocked down in approximately 45 minutes. Once the crews knocked the fire down, they found the unit was being used as a marijuana grow. Utility companies were requested to isolate the power to building for firefighter safety. San Bernardino County Sheriff was also requested.

Fires in marijuana grow facilities can be hazardous to firefighters as improvements to the facility often are non-permitted, contain hazardous chemical storage & are often heavily barricaded. Firefighters respond to thousands of fires annually countywide. Despite fire inspections and local knowledge of their area, firefighters often respond with a complete unknown of contents or what inside the structure. These fire are just a small example of hazards our all risk firefighters see.

Once the utilities were shut off, crews worked on overhaul of the fire for multiple hours. The cause / origin of the fire is under investigation by fire investigators. No injuries to citizens or firefighters were noted.

Glad no Firefighter was hurt.

Good Job and Teamwork, Happy No Firefighter Got Hurt.

Prayers for rain Ca to help those firemen to get these fires out!🙏🙏

Glad no one was injured for this illegal grow!😡

Just glad no one was hurt

Prsyers for firefighters. Thank you.

Thanks for all you do. Be safe

GOD BLESS YOU ALL, STAY SAFE AND SOUND!!!!

What would we do without our firemen.

Thank you for your service and dedication

Ill tell you a little secrete about smoke, it can be stuck to the bubbles of your foam system instead of pushed into the building with water.

Kim Foglesong Russell , is this near where your mom lives

Baldy Mesa Elementary, you were awesome! Thank you

Last Wednesday our members at station 304 in @city

LIVE FIRE TRAINING On Monday, May 2nd through Thu

Firefighters Respond to Board Up Commercial Buildi

Firefighters Respond to Board Up Commercial Buildi

Our members got a chance to meet with children at

Baldy Mesa Elementary, you were awesome! Thank you so much for having us at your Hometown Heroes Assembly. Your cards are the best we've seen by far! 🚒 🏫 💪

Earlier this week #firefighters responded to a residential structure fire on Azurite Ave in @CityofHesperia . Crews were able to contain the fire to the garage and one occupant was transported by ground ambulance with minor injuries. #Local935